I feel like my ovaries are going to roll out of my body and drop on the floor. I can visualize it now and the accidental kick of them against the eggshell colored wall. You gaSP. I know. But the trials of being female make us sturdy fem me fa tales. Which is much needed, especially in the middle east.
.
This week has been unruly for the Doring-Preston household, unexpected change and then lack of change have collided in our universe and I’m not sure how to place the pieces for a perfect, lifestyle Eden. Apartment leases and hunting and not hunting and maybe car buying, and if so- what kind of car pontifications have made me realize how absurdly expensive this country is. Pile on the maddening traffic and the constant jams and honking and time falling out of our pockets and I’ve pretty much reached the boiling point for my sanity. 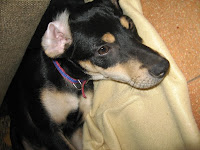 .
And poor Henckel, he got his balls chopped off today. That poor pup- as a rescue dog, anytime we take him out of his schedule he pukes himself from worry. Actually, that only happened once. But P Bonez described his puppy dog eyes when he walked out of the vet’s. And those eyes were very very sad. Then the vet described his constant crying before and after his surgery. He must be really attached. But now, his balls aren’t attached. Soon, they will be dried out bags, symbolic of the alpha dog he could have once been.