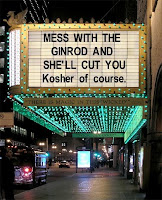 I’ve been trying to convince my Israeli co-workers that a true Caesar Salad has Romaine lettuce in it. This is after attempting to educate the manager of the restaurant I ordered from: “I have a plastic bowl full of butter lettuce, four tomatoes, and a side of Caesar dressing” I have my co-worker explain to him in Hebrew. “I didn’t pay 40 Shekels for butter lettuce Salad, I paid 40 Shekels for a C-A-E-S-A-R Salad.
.

Romaine Lettuce.
Romaine Lettuce.
.
You cannot give a customer Butter lettuce and four tomatoes and charge them an a**load for it.
.
It’s like advertising Pepperoni Pizza without the Pepperoni. Cottage Cheese without any Cottage. Peanut Butter Reese’s with no Peanut Butter. Dark chocolate that is white. Makes no sense.
.
They could have advertised it as “regular sh*t salad with Caesar dressing”. or perhaps the”5 Shekel salad that we falsely advertise and charge 40.”
.
Secondly, I don’t like the word Feminist. “I am a feminist” blah blah blah. “Independent woman” is fine, but the actually title of Feminist rings a dull thud in the Ginrod’s earlobes. I think of that word and I think of body odor. Feminist. Body odor. Feminist body. Feminist Odor. Smoulder Smoulder, charcoals on a grill. There’s a Barbecue tomorrow. I didn’t know being a responsible female with principles needs a name. The connotation of the word makes it seem so ugly.
.
At this moment, I could start a small revolution from the anger that builds between what Israeli’s think of as a Caesar Salad and women that coin themselves openly as a feminist. Calling yourself a feminist doesn’t change the world at all, but your name will. I’d much rather work on making a name for myself than resorting to titles.
.
Get your own marquee HERE
Share and Enjoy: