“ You should totally try out.” They told me smacking hubba bubba cherry cola pieces between their metal guarded molars. There were three or four of them, their blonde bangs contorted perfectly into two layers and held in place with four pounds of aqua net hairspray.

My back was against the terracotta tiles. I stared at them while fidgeting with my bitten down fingernails, the cacophony of flushing toilets around us echoed into my ears. My straight brown hair clung to my faded sweatshirt like the sticky legs of an octopus.

“Show us your split jump” they dared me, eyeing my hairy pole legs with smirks on their faces. Hesitant, I stood in front of them and showed them what I had been practicing secretly in the confines of my home.

Four years later, I found myself with my foot pointed straight above my ear, on top of a multi layered human pyramid. The memories of my static prone hair and knobby knees now behind me, I was now a toned, flat- chested fourteen year old, with an asymmetrical bob. Through years of private coaching, cheerleading camps and supplemental gymnastics classes, I became a mold of the quintessential Midwestern adolescent female, weathered in stiff clapping and deep yelling.

The human pyramid melted as I effortlessly slid onto the gym floor, my pointed toes lead the way as I hopped to the next spot, my arms systematically clapping and elbows perfectly aligned with my underarms in “arm chair” mode. “Thumbs pointing down wrapped outside of fist.” I would remind myself. “Stiff straight arms means slightly bent,” I nervously whispered under my breath, a reminder to keep my angles sharp. .

After ten more steps and the repetitive yelling of three colors in my deepest voice. I found myself facing my worst enemy with a palpitating heart and perspiring sebaceous glands. The cause of this allergic reaction would be the impending next stunt that featured yours truly as the shining star.

They called it the basket toss. Our senior coach introduced it to us as our secret weapon in winning this competition. Mastering such a high level stunt at our age would catapult us to regional champions, she explained with her wide blue eyes and waving a halfhearted notebook paper explanation of the stunt in front of us. To build it, two of the tallest girls in the squad would squat then weave their arms and hands into a mini-platform and four other girls would add to the buoyancy of the flier (myself) by placing both their hands underneath this platform. I never volunteered to be the flier for this stunt; my hesitation came from my natural fear of heights and a even stronger distrust of the adolescent girls below me who would be responsible for my safety.

This advanced stunt had hundreds of hours behind it. I woke up every morning for months with a basket toss knot in my stomach, ending the last academic hour of every other day knowing I would be thrown in a variety of directions during “practice” whether I wanted to do this or not.

On the count of three, I placed my clammy hands on the shoulders of the two base girls facing one another and jumped into the human basket awaiting me. All 6 girls would dip down in perfect unison with stiffened backs to propel me with momentum into the air like a rising phoenix into the universe. Or more so, propel me straight up into the gym’s speaker system that closely resembled a sputnik on the center of the roof.

The aim was to hit my peak height, arms outstretched and toes pointed into a perfect reverse dive. When I arrived at the peak, I would extend my long thin, limbs into an elegant toe touch then sweep my legs together in a V-shape so the rest of the squad could catch me in perfect motion.

This of course, did not happen.

This climax of our symphony, where the world should have held its breath in awe instead, held its breath in fright. It could have been a mis communication between the physical world and the spiritual world, or the very instance in the universe where that the laws of physics were shaken like dice- to this day, I may never know. The minute the girls below me counted and then dipped, I knew I would never rise like Phoenix did in x-men. I was far from the spandex-clad superhero I strived to be. Instead, the hushed and worries faces in the audience witnessed my super hero bloomers, the cheerleader version of granny underwear in the school colors. The elegant catch that had been practiced tri-weekly for two months morphed into a panicked scramble to awkwardly catch my crumpled body from the air that rejected me.

Once my red and white Asix shoes were safely planted on the newly waxed gym floor, I took a moment to stare at my white shoes, frozen with the failure of my actions, the final proof of my desire not to participate. I savored the two deep breaths I took before completing the rest of the cheer. Out of the corner of my eye I sensed the looming anger of my senior coach, facing me with crossed arms.

We left the gym floor with an exit chant. Lightly panting, I walked out into the lobby, greeted by the furious glare of our high school senior cheerleading coach. “You ruined, everything.” She spurted at me before stomping off. This statement was not news to me, the minute I placed my hands on the shoulders of my squad-mates I knew we were doomed. Shaking, I grabbed the red, white and blue carnations gifted to me and ran out.

The following year, I tested my boundaries by rejecting the red, white and blue and replacing it with a black flight jacket and a predominantly shaven head. Instead of my name on a plaque in the varsity girl’s basketball locker room, I chose to write for the school newspaper and dabble in the drama club. The boys who used to invite me to parties now accused me of becoming a lesbian, frustrated at my need to be different from them.

Two years after the relief of high school graduation, curiosity brought me back to an old classmates Holiday party. I arrived at a petite white house, with chips of paint flaking off like snow on the browned grass below. Christmas tree lights were carelessly strung around the frame of the creaky patio, a few people stood outside with frozen breath, sucking on cigarettes for heat. I let myself in to the warmth of the house. Greeted by the old smiles of classmates I had not spoken to in years, I am offered a Budweiser by another face while walking through the leftover gift-wrapping of a secret Santa event I happily missed. I settle in the corner of the kitchen, adjusting the zipper of my coat and observing old friends. Many of them are still in their high school roles: the academic soccer player talking politics with the valedictorian. The varsity basketball player caressing the chin of his high school ex girlfriend and back burner hookup, my old best friend intently talking to another girlfriend in another corner while playing with her long, silky brown hair.

“Suuuuusi! Have a shot with me!” The shriek is distinct. One of the four voices that first entered my life on that unique day in 5th grade in the girl’s bathroom. “Why Not” I shrug as I pour her and myself a shot of chilled, clear liquid I find in the freezer. We clink our shot glasses together as I lean against the sink in the bathroom. “Can you believe it’s been TWO years since high school?” She asks me with her glazed blue eyes. “Oh my God, LOOK what I got as my secret Santa” she interrupts herself as she pulls out a thong from her back jean pocket. Her face is round with awe as she tries to step into them. Lightly stumbling, she manages to slip the turquoise lace over her stonewashed jeans. “Is it my color?” she giggles as she poses for the onlookers in the living room, flashes erupt from digital cameras. “It’s a thong.” I flatly overstate the obvious, losing any desire to continue this conversation. She refocuses on me again. “Remember that time in 5th grade, when you showed us your split jump in the girls bathroom?” she giggles at the memory. “Ah yes, how could I forget” I answer her playing along. She continues: “It was the funniest joke wasn’t it? But we TOTALLY ended up loving you when we got to know you.” She laughed to herself.

My jaw clenches as this realization. I slowly breathe in through my nose, hiding my disdain by breathing out immediately. “Another shot?” I offer the hubba bubba smacking blonde. I pour the liquid slowly this time; masochistically savoring what I know will be the last few minutes of our reunion before I completely move on. 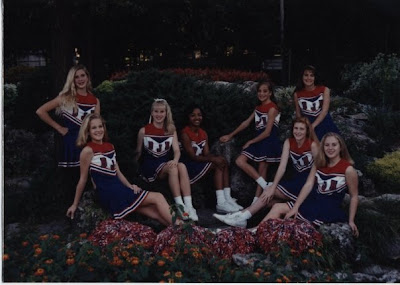