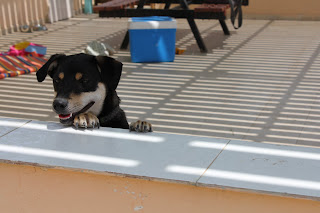 Our pup Henck has been exhibiting more human like behavior each month that goes by. It was first the heavy usage of his paws to retrieve what he wanted. Using them as if his hands were in muffs trying to hold and push things into his range of fire.
.
Then it was the pillow.
.
Following my lead, he put two and two together and realized a pillow is just for your head. So when we gave him our old pillows for his dog corner, you stopped seeing him actually lying on the pillow with his body and instead you would see him place only his head when he rested.
.
His new human neurosis is preparing the apartment for the day. At night, he sleeps in a pet taxi with all of his pillows and blankets. After we walk him in the morning, he pulls out the blankets and a pillow and places them in parts of the apartment that he will frequent during the day: the yellow blanket is dragged and placed near the inside of the couch under the coffee table and the checkered blue blanket along with a pillow is brought by Henck to his “doggy corner”, a large mat placed on the edge of the living room.
.
This morning, I was convinced that the Huzzy did all of this arranging. But no, it’s Henck the pup, who is now an intricate part of the Doring-Preston household.